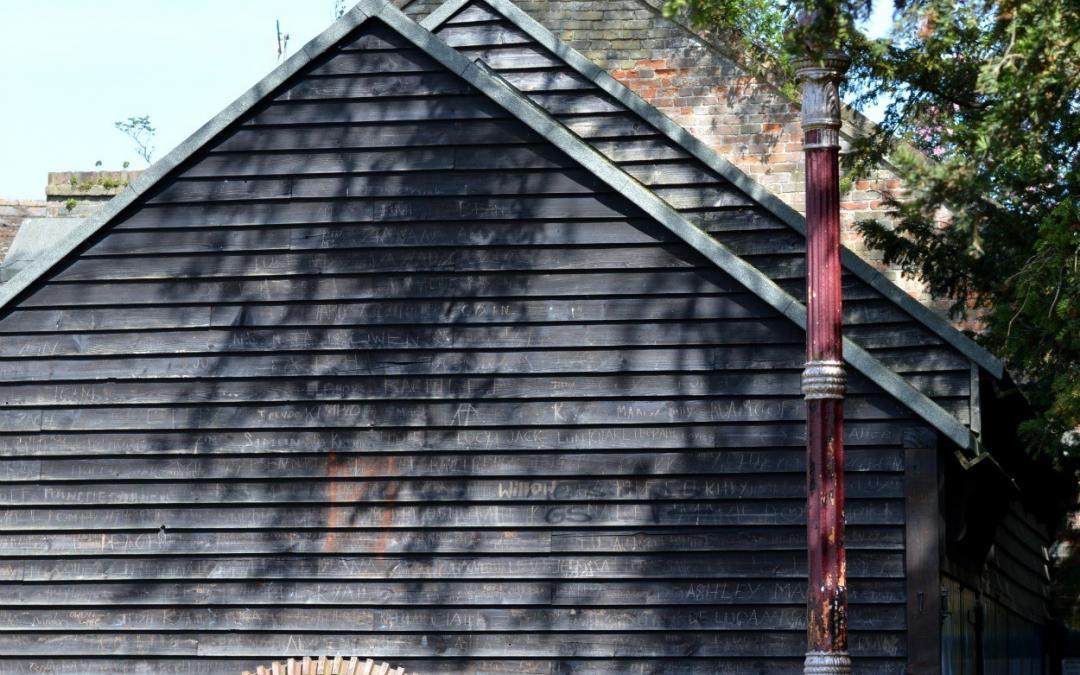 What’s Faversham famous for? Beer fans will need no reminding that it’s the home of Shepherds Neame – England’s oldest brewery which was founded in 1698. The brewery can be visited on special tours but Faversham can claim to be the site of an even older industry that can leave more than just a sore head!

But the town also has the oldest surviving gunpowder mill in the western world! Faversham Gunpowder Mills – The Chart Mills lie barely 400 metres from the edge of the centre’s medieval lanes but lay overgrown and neglected until the early 1960’s. Faversham’s long gunpowder industry finally came to an end in 1934 when production was moved to Scotland.

We recently visited the Chart Mills museum which opened in 2011 after a long period of restoration.

It’s located in the Davington area of the town and we approached it from the Bysing Wood Road end which is just by a Pond – saved by the Borough Council from development. It’s a good place to sit down for a moment and enjoy the tranquil surroundings.

The area is full of fascinating old brick buildings which served as houses for the munitions workers or as part of the old workshops themselves. Although signposted from the city centre, there’s no direct website and it’s a little hard to find, tucked away in suburbia. The streams or creeks are as good a guide as any to follow.

Nowadays, the Faversham Gunpowder Mills is in a quiet housing estate but things would have been anything but quiet when production was in full swing. Making gunpowder was highly dangerous and 100 people lost their lives in an explosion at a nearby powder factory in 1916.

The Chart Mill museum site is a modest but informative building. We learnt from Richard, one of the volunteers, that Chart Mills is an incorporating mill, where the ingredients having been mixed together are then incorporated to become an explosive mixture. This controlled the quality, power and evenness of burning so no wonder it was a lethal cocktail and more volatile than anything produced at the nearby brewery. The workers had special uniforms with the pockets sewn in to prevent matches or anything else setting off the powder with such devastating results. The Fleur de Lis Heritage Centre, as museums are called these days, has some of the worker’s uniforms on display. It’s in the centre of Faversham and is a good stopping place to learn more about the many Gunpowder mills that used to frequent Faversham.

Concern over levels of drinking amongst the workers led to restrictions in the licensing hours which were still in force until quite recently brought in during the first world war to increase production and reduce drunkenness. Whether they had Faversham in mind, I don’t know but the horrific explosion must have played a part.

Inside the Faversham Gunpowder Mills, there are old photographs of workers at the mill as well as maps of where the mills stood and a history of the gunpowder industry in the area. The extensive restoration works is also well documented.

In it’s heyday, Chart Mills had 2 waterwheels which drove 4 mills. Today there’s a preserved iron wheel outside which helped to control the flow of water. Also, still visible is the pit of the other mill and the circular bed stones of the other 3 mills, as well as spare edge runners and other parts of the gunpowder making industry.

As an early nationalised industry, gunpowder from Chart Mills would have been used by the British army at battles such as Trafalgar and Waterloo. But it was a constant battle to ensure that the gunpowder didn’t explode in the mill. One such explosion blew off one of the twin towers of nearby Davington Church in 1781.

There’s a pleasant circular walk, uphill in parts around the Bysing Wood area which takes in both the church and the gunpowder mills. The church is fascinating in its own right. It’s actually the oldest building in Faversham, having been originally part of a much larger priory founded in 1135 as a convent for nuns. Much of the buildings survived Henry VIII’s dissolvement of the monasteries in the late 1530s as the order had recently died out.

Restored in the 19th century, the nun’s quarters were converted into a private house which remains to this day. Talking of remains, we wandered around the church and cemetery and spotted the grave of a woman who lived to be 100 years old, dying in 1814.

There’s a nice legend about those twin towers of Davington Church that links the gunpowder mills with the even older Reculver Church near Herne Bay. An Abbess of Davington was shipwrecked off Reculver and promised to build two towers at the church if she survived the storm. The winds abated, she was saved and the church duly got two towers. That is until the gunpowder mill nearby proved even more destructive than the storm out at sea.

There’s much to see in the centre of Faversham particularly around parts of the newly renovated quay area. But it’s not all about beer and barges. So don’t forget to venture a little further out to discover more about one of the town’s oldest industries – gunpowder making – as well as its oldest building – Davington Church.