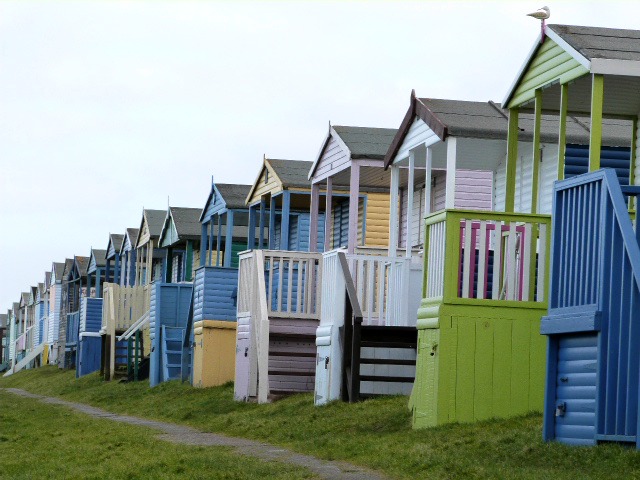 Say that you’re going to Whitstable and before you can get past the end of the first sentence someone is bound to mention Oysters. And do you know why?

The height of the industry was in the mid Victorian era when millions of oysters were raised annually. The stretch of the harbour market is the best place to sample some local products although if you want to sample one of the Whitstable native variety you’ll have to wait until there’s an R in the month. I couldn’t wait and instead tried some of the Pacific oysters which are bred in tanks to maturity on beds in the shallows. They slipped down a treat with a dash of pepper – although like a pint of whelks, another one of my favourites – what is soft and succulent to one person – is all rubber to another.

The High Street reveals rows of neatly converted fisherman’s cottages, with attractive weatherboarding displays. Holiday lets abound in brightly coloured doorways. The town feels vibrant with a Sunday morning mix of day trippers and professional couples and local families enjoying a leisurely stroll in and out of the many alleyways and the narrow walks behind the seafront. Niche corners and nooks house niche shops and shabby chic is very much the order of the day. Drift amongst the driftwood and allow yourself to be amused by the inventiveness of the art in the beach huts

The diving suit was invented in Whitstable in 1828 and a steel divers helmet is on display in the harbour. We had a late breakfast in Tea & Times and amongst the art house paintings on the walls was one of a diver in a full diving suit with an umbrella!

But there is more to Whitstable than just oysters. In recent years the town has built up a deserved reputation for combining seafood with a thriving art and music scene. The Green Man festival on the first May Bank holiday sees the town dress up and welcome the start of the season with a wonderful mix of music, costume and an eclectic culture. That day it also hosts an annual 10k race which starts high above the town and then winds its way to Tankerton and through a holiday caravan park by the mudflats and then along the sea front coastal path back to finish by the main concourse. Tankerton’s grassy banks on the route along the coast east to Herne Bay are also home to several rare and protected species of plants and butterflies

It’s a good run out – especially when the sun is shining and the wind is on your back. I’ve been lucky enough to run in the last 2 races and the mass start, which amounts to a frenetic downhill charge, is truly a sight to behold. The smiling faces of the runners are somewhat more lined and weather beaten by the end of the race but it only adds to the overall atmosphere.

Boat building was one of Whitstable’s main industries until the early 20th century but more recently, it is the rows of highly prized wooden beach huts, set three deep in places on the banks out to Tankerton that attract most attention. Often brightly painted and individually decorated, the best situated ones are reputed to fetch upwards of £30,000 with a waiting list to rival those wanting to join Lords Cricket Club.

The original harbour was built by Thomas Telford in 1832 and the first railway station was actually inside the harbour gates – with a level crossing traversing the main Harbour street. This leads on nicely to the ‘Crab and Winkle’ way which was the first steam passenger railway, when it opened in 1830. Built by George and Robert Stephenson, the locomotive Invicta carried around 300 passengers the six miles to Canterbury. The train was to become the prototype for the famous Rocket which powered into history just four months later on the Liverpool to Manchester line. Finally closed in the 1950’s having carried its last passengers twenty years earlier, today the Crab and Winkle line has been restored as a walking and cycle path. The route takes in some delightful scenery through Clowes Wood, across ancient salt tracks, climbing Tyler Hill Tunnel and finishing near the Goods Shed in Canterbury. But don’t be fooled – it’s actually a gastronomic paradise. But if you’ve just walked along the whole way, you may want to eat more than just crab and winkle.