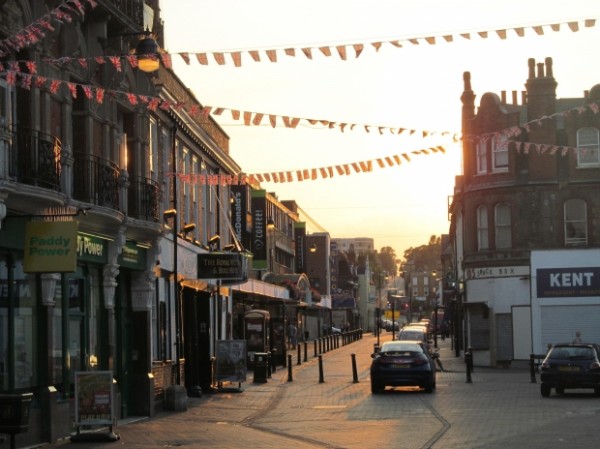 ‘Dirty Dartford; peculiar people. They bury their dead above the steeple’!

What a strange way of starting a blog post about a Dartford history, but like many an old saying there’s a grain of truth in the dig at the folk of this corner of North West Kent. The cemetery at East Hill is above the Church at St.Edmunds Burial Ground but there’s never been a steeple. Brush away the ‘dirt’ and you’ll find all sorts of people – peculiar or otherwise – have been crossing Dartford since time immemorial. Indeed, the town’s very name comes from the ford – or bridge – at the crossing of the river Darenth. Nowadays the words ‘Dartford Crossing’ mean something very different to the thousands of motorists who daily drive across into Essex and beyond racing past the recently de-commissioned toll booths.

Dartford can truly claim to have a first class carriage to itself as the early inventor of steam engines, Richard Trevithick lived, worked and died in the town. A pioneer of steam whose fortunes rose and fell with the regularity of one of his engine pumps, he died a pauper and was buried in the cemetery. At the time Trevithick was lodging in the Bull public house which still stands in the centre of the town and his body was carried up the hill. Penniless at his death he was interred in an unmarked grave. Today a plaque marks the approximate spot. A giant of a man for his time, in height as well as vision, so in death, he looks out over the town and indeed the railway station. It’s there that a series of plaques to commentate the development of the train records Trevithick’s ‘Catch me who Can’ 1808 early steam powered locomotive.

In honour of Trevithick, I caught the train to Dartford and crossed the bridge by the Orchard Theatre and the space recently vacated by Waitrose and descended into the town. The bridge across the river Darenth is not far away. Sir Edmund Spencer’s epic Elizabethan poem Faerie Queen records the river as ‘the silver Darenth, in those waters, cleane, ten thousand fishes play’. Today, you can follow its course southwards through the park behind the public library and museum via the Darenth Valley Path. About five miles down river is Lullingstone Castle and the Roman Villa which is owned by English Heritage and makes for a pleasant summer walk.

But back to the town. Holy Trinity church on the western side of the river is an impressive flint and stone building with a compact square tower. Inside there’s a monument to Sir John Spilman, who started a paper mill nearby, a traditional industry associated with the town and nearby Horton Kirby. The coat of arms of his wife, reveals a man dressed in a jester’s cap, which also appears on their tomb. The story is that this may be the original of the term ‘foolscap’? Apart from the Bull, the other notable pub is the half timbered Wat Tyler, on the corner of Bullace Lane. Tradition has it as a stopping point for Tyler and his band of rebels on their way to London and a parley with the young King Richard II.

The museum and public library are impressive examples of civic buildings and stand next to the entrance to Central Park. The park opens out into an expanse of walk ways and a newly renovated tea house. At the end is an athletic track – the home of one of Dartford’s two running clubs not to mention a Triathlon club. My own memories of the park are more of a running than a walking nature as it forms the last leg (very appropriately) of the local Dartford half marathon which I’ve run several times. By the time I’ve reached the park, I’ve had more steam coming out of me than a Trevithick loco although fortunately I’ve not broken down quite so many times.

I’ve also taken part in the Dartford Bridge 10k (although not actually over the Bridge) and the Dartford 10m race which starts from the town’s football club.

Throughout the centuries Dartford has always been at the hub of history. And with Goodman’s Dance Hall, opposite the park, owned by the Chief Judge from Strictly, it can even claim to dance to the march of time. So whether it be road, rail, river or running, Dartford’s always on the move.